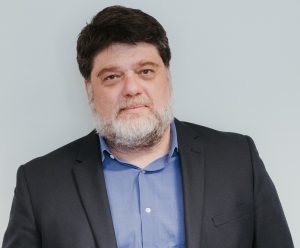 Dr. Kyriakidis’s research interests include geostatistics, geocomputation, and geoinformatics, as well as their applications to geographic information science and systems, remote sensing, earth, atmospheric and environmental sciences, public health, and archaeology. He has co-authored more than 70 articles in peer-reviewed scientific journals and has made numerous contributions in conference proceedings and edited volumes. He has co-authored (with Andre Journel from Stanford University) the book entitled “Evaluation of Mineral Reserves: A Simulation Approach”, published in 2004 by Oxford University Press. His publications have received significant attention as attested by the numbers of citations they have received (h-index: 34 at Google Scholar, 29 at Scopus, and 27 at Web of Science, as of June 2022). Dr. Kyriakidis has received a best full paper award (with Rui Zhu and Krzysztof Janowicz from UCSB) for his 2017 AGILE conference paper on quantifying spatial patterns in geographic fields, a best paper award (with Petros Gaganis from the University of the Aegean) in the journal Mathematical Geosciences for his 2013 publication on efficient simulation of (log)normal random fields for hydrogeological applications. He has also been an invited keynote speaker at several international workshops and conferences, such as the “Scale and Spatial Analytics Workshop” organized in February 2020 by the Spatial Analysis Research Center of the Arizona State University in the USA. His research has been funded by the US National Science Foundation, NASA, NOAA, the Greek Secretariat for Research and Technology, and more recently by the European Commission and the Research and Innovation Foundation of Cyprus.

Dr. Kyriakidis has served on the Scientific Committees of numerous international conferences and has reviewed manuscripts and proposals for a wide spectrum of scientific journals and international funding agencies, respectively. He is currently a member of the Editorial Boards of Cartographica (since 2018), and of Spatial Statistics (since 2012). He has served as an Associate Editor for Geographical Analysis (2014-17), a member of the Editorial Board of the International Journal of Geographical Information Science (2007-17), a Board Member of the Hellenic Geographic Information Systems Society (2015-16), as well as a member elect (2018-22) of the Council of the Association of Geographic Information Laboratories in Europe (AGILE). Dr. Kyriakidis was the Chair of the Scientific Committee of AGILE 2019, the 22nd AGILE Conference on Geoinformation Science organized at CUT’s premises in Limassol in June 2019, as well as the Co-Chair of AGILE 2021 (online event). He was also the Chair of the Local Organizing Committee of CAA 2021 (online event), the Annual Conference of the international organization Computer Applications and Quantitative Methods in Archaeology.